Respect is a word often misused in our vocabulary and unfortunately it is commonly demanded from people who are the least deserving of it.

Let’s find out what respect really means, at least according to Merriam-Webster’s Dictionary:

“: a feeling of admiring someone or something that is good, valuable, important, etc.

: a feeling or understanding that someone or something is important, serious, etc., and should be treated in an appropriate way

: a particular way of thinking about or looking at something”

b : the quality or state of being esteemed”

I have worked in my share of low-paying, toxic, and unethical places of employment where supervisors and managers have demanded “respect” from employees. I have also seen a few pastoral staff and Christian leaders in the community demand respect from people. Respect is important, but as I like to say, ‘If you have to demand respect, you don’t deserve respect.’ The conclusion I’ve made is that people often confuse respect for subordination. What they really should be saying is, ‘You are not being subordinate to me’ or ‘you are being insubordinate’.

“a bending to the authority or control of another”

“: in a position of less power or authority than someone else

: less important than someone or something else”

This discussion about subordination and respect has had to take place between myself and several staff in the workplace. These were supervisors and managers who had placed me in a situation where my safety was at risk; it was also a workplace that had numerous complaints made about bullying and harassment at the hands of those we were subordinate to. Eventually almost all of these managers were fired. In the end it didn’t make a difference in my life because I am still struggling with a work related injury that resulted from my managers’ bullying, harassment and violation of labour laws. 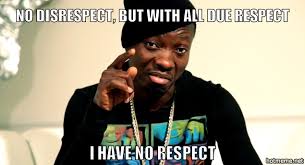 We need to respect the work that we do, we need to respectful towards the customers and clients that we serve, but when management starts demanding respect, I automatically question why these managers need to demand respect instead of having been freely given it by their staff. In the workplace I will be polite, kind, cooperative, a team player, and all the other adjectives and characteristics that make for a healthy workplace, but I can honestly say that I won’t freely admire and look up to a manager. I certainly wouldn’t recommend sharing these values with a manager; that would be a ridiculous thing to do and could likely lead to bad manager-employee relations and at worst, the loss of your job.

I would caution people in using the word respect without fully knowing the meaning of the word and whether or not you are actually deserving of the act of being respected. If you demand that people respect you, you are more likely not to be respected by them. 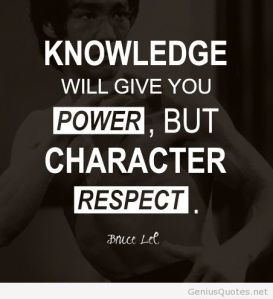 Instead of demanding and trying to force people to respect you, let us remember this:

Humble Service in the Body of Christ

3 For by the grace given me I say to every one of you: Do not think of yourself more highly than you ought, but rather think of yourself with sober judgment, in accordance with the faith God has distributed to each of you. 4 For just as each of us has one body with many members, and these members do not all have the same function, 5 so in Christ we, though many, form one body, and each member belongs to all the others. 6 We have different gifts, according to the grace given to each of us. If your gift is prophesying, then prophesy in accordance with your[a] faith; 7 if it is serving, then serve; if it is teaching, then teach; 8 if it is to encourage, then give encouragement; if it is giving, then give generously; if it is to lead,[b] do it diligently; if it is to show mercy, do it cheerfully.

9 Love must be sincere. Hate what is evil; cling to what is good. 10 Be devoted to one another in love. Honor one another above yourselves. 11 Never be lacking in zeal, but keep your spiritual fervor, serving the Lord. 12 Be joyful in hope, patient in affliction, faithful in prayer. 13 Share with the Lord’s people who are in need. Practice hospitality.

14 Bless those who persecute you; bless and do not curse. 15 Rejoice with those who rejoice; mourn with those who mourn. 16 Live in harmony with one another. Do not be proud, but be willing to associate with people of low position.[c] Do not be conceited.

17 Do not repay anyone evil for evil. Be careful to do what is right in the eyes of everyone.18 If it is possible, as far as it depends on you, live at peace with everyone. 19 Do not take revenge, my dear friends, but leave room for God’s wrath, for it is written: “It is mine to avenge; I will repay,”[d] says the Lord. 20 On the contrary:

“If your enemy is hungry, feed him;
if he is thirsty, give him something to drink.
In doing this, you will heap burning coals on his head.”[e]

21 Do not be overcome by evil, but overcome evil with good. 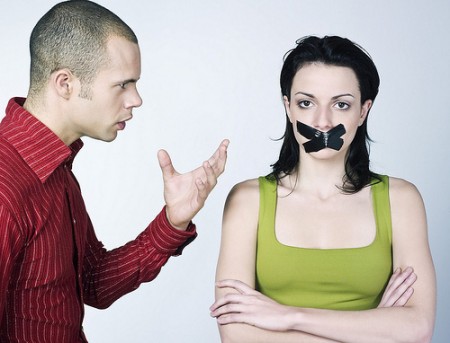 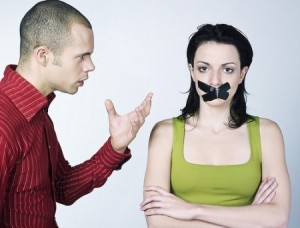 Over the last few weeks I’ve had more than one negative encounter with a man who left New York to come to Alberta to be a missionary. Something was hinky about this guy. I was suspicious of him because; who would leave the tri-state area to come to a city like Edmonton to be a missionary in the inner city? No one, and I mean no one leaves the United States to come to Edmonton to learn about inner city ministry. Our city is not at the forefront of urban ministry. We are not leaders in this area, we are not even close to being followers.

My first conversation with the missionary involved the hot topic of women’s role in society and the church. The missionary quoted Paul and when I told him I do not adhere to Paul’s teaching that women be silent, he challenged me by asking, “Don’t you believe the bible?” I explained to him that, yes, I believe the bible, but I don’t believe people who misinterpret the bible and/or use various verses to discriminate or hurt others. He then challenged me about authority in the church. He asked me if I followed the authority of my male pastors. I had to stop, and think clearly, and then set him straight.

I had to draw the line with the missionary because we were both serving in a shelter together. This is a shelter where he is in a semi-leadership position. He has daily encounters with male clients who grew up in violent homes where men asserted their domestic authority over the women and children. These are men who have learned to continue the cycle of domestic and social violence.

These are not Christian men who understand what it means to lead a loving and healthy home. These are men in the midst of struggling with addictions, criminal acts, and violence. Some of these men have records for sexual assault and other acts of violence against women. Some of these men are under house arrest, others are on parole. He is a missionary who is working with a population of men who had to suffer abuse at the hands of Christian run schools which we refer to in Canada as Indian Residential Schools.

I told him and his peers that in order to help bring the most effective healing to the people at this particular shelter and addictions recovery program, they as Christian leaders needed to listen and learn the truth about Indian Residential Schools and listen to first had accounts by those whose lives were torn apart by Christian run school systems that were designed to force our Native Canadian population into becoming Christians. The system did not bring them closer to Christ, instead, it brought them closer to poverty, death, abuse, and lifelong trauma.  It taught an entire people group that being under Christian male authority was abusive and racist.

Using scripture within the wrong environment or in the wrong context can do serious damage. We can’t take missionary work or outreach ministry lightly; we are dealing with people’s lives. If you believe that scripture says women are to be subordinate to men, that is fine, but it’s important that you keep that practice within your own home. If you and your wife agree to such an arrangement, then that is fine for you and your spouse only, but that arrangement is never to be applied to women outside of your home.

I don’t want to engage in the heated argument about the role of women in society, my only goal in writing this blog post was to encourage Christians to be more aware of how they use scripture and with who they are using it with. Let us not be followers of Christ who damage others with scriptural verses that were originally intended to bring us closer to God and community.

Are there any verses that you quote often? Do you sometimes use these verses out of context or incorrectly apply them to various situations?

Think about the verses you quote most often. Ask God’s Holy Spirit to help you keep his words pure by not using them incorrectly.

When time or interest permits, try to do some further study on quotes from scripture that you frequently use. See what the context and background of that verse, chapter or book is about. This is one of the best ways to help prevent us from unintentionally taking verses out of context or incorrectly applying them.